One of the important lessons I have learned this year is to LET IT GO. (Unless it’s a fart and you’re in the process of meeting dignitaries. Then please. Restrain.)

In all seriousness, letting go is important. And I’m not just talking about the physical stuff. I’m talking about the mental and emotional energy you put into holding on to negative thoughts and feelings. All that self criticism, that guilt you feel over something you did seven years ago. Obsessing and worrying over what other people think. Negativity and resentment towards people who have wronged you.

The only thing this kind of crap does is punish ourselves. At the risk of sounding all new agey; negativity breeds negativity. Breathe. Write. Talk. Scream. But let it out, in whatever way you can.

If your mental and emotional being is clogged up with negativity, how can we possibly find room for the positive stuff?

I’m going to go on a bit of a tangent (you have been warned). I’m well aware that I am a hoarder of negative emotions, but I never knew I was a physical hoarder, until recently when Hubster and I had to massively downsize. We got rid of about half of our furniture and other worldly goods. Probably more. Now I thought I was pretty good at chucking stuff out. We moved a lot when I was a kid and I never really had the chance to collect. But when we got down to it I couldn’t believe the amount of CRAP we had accumulated. To give you an idea of the craptastic calibre of crappery, here are a few items we found (and discarded):

– about fifteen odd shoes and a destroyed pair of high heels that Monsiour Bark-a-lot had chewed as a puppy but I just couldn’t bear to throw out because, dude, I bought these shoes in HAWAII. Do not mess with my HAWAIIAN heels!

-twenty or so miniature metal pencil sharpeners in the shape of canons and such on Hubsters desk. Why. WHY?!

– a ridiculous, possibly uncountable number of broken coat hangers. Not even the useful metal ones that you can bend and stretch and use to break into cars (When I say “break into cars”, what I actually mean is “watch the guy who lives in a caravan, covered in tattoos, break into MY car on the occasion when I locked my car keys inside”. He made it look so EASY. I must have looked impressed because he kind of casually stretched as he left saying “Yeah. Done that a few times.” Totally assuming he was just extremely careless with his keys ). No these were the trusty cheap plastic versions. Useless.

– and the creme de la creme…a Mitsubishi Magna which hadn’t started for the last three years, had spent it’s time taking up the entire garage, collecting dust, while simultaneously being fully licensed and insured. When the piece of junk broke (in the rain. With a baby in the back. Of course) we bought a new car and kept the Magna just incase it could be fixed, and then sold, and then we could make a shit load of money. Spoiler alert: it couldn’t be fixed. In fact, it took three people to push it down the drive so scrap metal could pick it up. 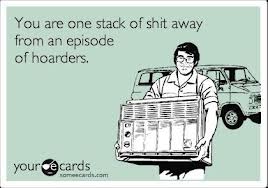 At first we were agonising over each item…”do we need it? Should we keep it?”….by the end we were all “GET THIS STUFF THE HELL OUT OF HERE!” We got more and more ruthless. We chucked, and sold, and gave away, and took to charity. In the end I left an entire outdoor setting on our front verge with a “Free!” sign taped to it, because it wouldn’t fit in the car to take to charity, and I could not be phaffed with listing it to sell. (You get some odd people on GumTree. When I tried to sell my first car we had a guy who wanted to pay us in yellow sapphires. Totes legit.)

The amazing thing was that as soon as we got rid of the crap I started to receive cheques in the mail. I’m not even kidding. I think I’ve cashed a cheque, like, maybe five times in my life. And that was probably birthday money in circa 1995. But they kept coming in, there had been a paperwork error in our favour…we had paid our power bill twice (pffft when has THAT ever happened!)…all this really random stuff. It was like now we had gotten rid of the crap we had room to receive.

I truly believe that this same principle applies to an emotional level. I’m a terrible emotional hoarder. I analyse my (and everyone else’s) behaviour to a ridiculous degree. I beat myself up. I get inwardly panicky about conversations I had months, if not YEARS, ago. I worry and worry and worry and worry about what people think of me, what will happen in the future, whether I acted in the correct manner. Is such and such angry at me. Am I a good parent. Did I leave the cooker on. You get the picture.

All this hoarding does is take away my time, energy and sleep. It doesn’t improve the situation. It doesn’t help relationships. It really doesn’t do anything except make me feel like some kind of hyper anxious meercat. My physical health is affected too, because of course many physical disorders have links to anxiety, depression and general poor mental health.

( A recent photo of me. I know. Bit heavy on the eye makeup)

Now I’ve lost a lot of time this year that I will never be able to get back again. I spent five months in hospital, and close to a year, now, being physically and mentally unwell. I’ve missed big opportunities, career wise and family wise. I spent too much time away from family and friends. Quite frankly, I don’t want to waste any more of my precious time on negativity.

So I’ve started to Let It Go. My favourite method at the moment is to allow myself a minute or two to indulge my obsessive nature and worry about whatever it is that I’m worrying about at Hyper Meercat Level. Then I take a deep breath and let it go. What I have noticed is my mind is more free. I don’t have that tight anxious feeling in my chest. By getting rid of the emotional junk I hoard, I am allowing room for more positive things to enter mind, and my life in general.

It’s important to remember that worry, by its very nature, is always stuck in the past or projecting into the future. But life is going by, every single second, and you will never get Now again. This is it. Life is Now.

So like the annual spring clean we conduct in our houses, why not try a spring clean of the mind? Forgive yourself for the times you hurt others. Forgive those who have hurt you. Allow yourself to get angry or upset or WHATEVER, but at the end of it let go of the crap you our holding on to. Open yourself up to new possibilities and positivity. I’m not saying it’s easy or that I’m some kind of life expert (heh. someone who was practically in a straight jacket only five months ago giving life advice. That’s amusing). I’m not saying open your mind and VOILA you’re cured!

What I am saying is experiment, try to let things go at even the tiniest level. Try to chuck out even the smallest piece of the emotional baggage you hold. See if it helps. And if you are anything like me, similar to the cheques I received in the mail, I promise you will receive in the most unexpected of ways.

P.s. Did you notice that I wrote this entire post without a single reference to Frozen. What self restraint. 😉

2 thoughts on “Let It Go: A Lesson In Hoarding”