This semester has been a bit of a write off really. I’ve been up, been down, been psychotic. It all has been really really hard.

Now my personal philosophy for when the going gets tough is to tell myself to keep calm and carry on, convince myself I am fine, and generally  beat myself up for being anything less than perfect.

Now this approach is all very well, except when it isn’t very well. For example last year when I attempted to ‘keep calm and carry on’ for seven months becoming progressively worse before I sought and accepted the help I needed.

But back to this semester. It’s been bloody hard. Ask anyone who has completed assignments and sat mid terms whilst psychotic (see…I’m admitting it now…!Revelation!) But as usual I have struggled on and struggled on.

Until the day I dreaded mothers day.  Why? You ask? Mothers day should be lovely. A nice spot of family time plus the potential to be pampered. What’s not to love? I suddenly realised that I was dreading mothers day because it meant one less day to work to achieve my goals. Suddenly, I stopped. I mentally slapped myself for being so ridiculous. And I booked an appointment with my doctor to get an extension.

Today I got to see Dr. Longname. As well as a medical certificate and a new medication script (which by the way are wafers, not pills. I ask for a different medication that doesn’t make me feel like chowing down the entire pantry, and they give me wafers?! Mind. Boggling.) I had a little heart to heart with old Longname about stigma.

You see, given my extensive experience with the mental health system I am undoubtedly against stigma towards those with mental illness. Well, at least that is what I thought. Longname told me I was self stigmatizing. That if I had a physical illness I wouldn’t hesitate in asking for support. I suppose he is right. Because what I endure is mental. Because it doesn’t leave any physical trace. Because it is indeed, so stigmatized. I tend to try not to think about it. I just want to be normal, and be treated as normal.

But doesn’t anyone? Those with obvious disability generally want to be treated as any other person.

Of course, Longname agreed. But if the disability were to hamper the individuals ability to study and achieve her best, the university would have no hesitation in giving out extensions for work and other supports.

But not this time 🙂 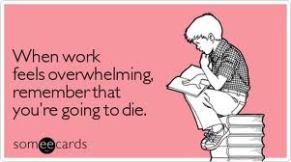 Proud to be a part of

I am proudly a part of the Bipolar Blogger Network. Come and check them out for excellent blogs and resources pertaining to Bipolar Disorder!

I also write for